I love train travel, especially in Europe.  Taking an overnight train not only saves you money on a hotel room but also doesn’t waste a day of travel.    I wanted to experience train travel in Thailand so I booked an overnight train from Bangkok to Chiang Mai.  The first class sleeper is only about 5 dollars more than second class, so made sense.  In addition to first and second class sleeper, there is also just seating.  In all, three classes.  First class is a shared compartment (unless you pay for both berths).  My cabin-mate, Jean-Claude, is originally from France, now in New Caledonia.  His english was pretty decent, although he didn’t think so.  One thing that translated very well.  A phrase I would love to say someday (and not have it be forced unemployment), “I don’t work anymore.”  He is the second former military person I’ve met so far on this trip to tell me that.  Hmm.

Anyway, to call this first class travel is quite a stretch.  The cabin is small, tired looking, but well air-conditioned.  You get better meals at the outdoor markets and shock absorbers (or whatever they use on trains to make them travel more smoothly) are non-existent.  Jean-Claude just kept sarcastically saying, “This is first class.”  Still, it was cheap and manageable.  That was, until Jean-Claude came back from a tour of the one cabin–because apparently you are locked from exploring beyond it–and the toilet.  He said wait until I see the toilet.  I should have suspected something was up when the porter came to tell us not to throw paper in the toilet (and do what with it, then?).

Now, for those who know me and my phobia of public toilets, you can imagine the thoughts running through my head.    I will wait as long as possible to avoid public restrooms.  So I decided to take a stretch and go.  I opened the door and immediately panic set in.  Looking at what was nothing more than a hole with metal around it, this became the most traumatic experience on the trip.  Okay, I exaggerate a bit.  But let’s set the scene here.  A hole.  A shaking bouncing train.  And wetness everywhere.  Now on solid ground, guys sometimes have a hard time aiming properly, let’s be honest.  On this train?   In this closet of a toilet?   Now I realize that part of the uh, charm of much of Asia are the holes in the ground for toilets.  But this is supposed to be first class.  Let’s just say I’m glad I didn’t eat a big meal anytime soon before this 14 hour trip.  While Jean-Claude said he had to take a picture of it, I didn’t for fear I’d start sweating from fear and drop the camera down the hole. 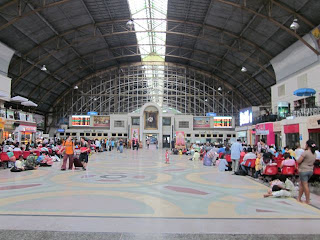 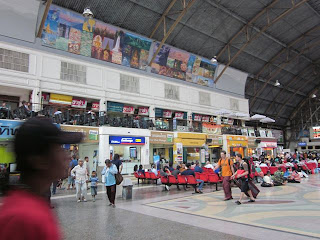 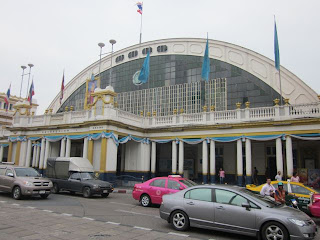 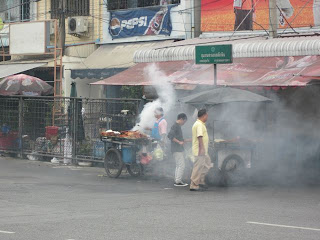 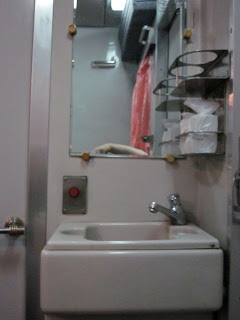 Cabin sink and not much else 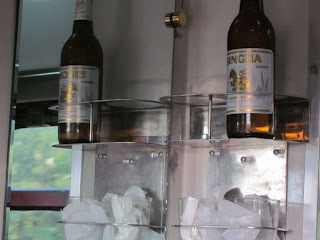 Singha to get through the ride.  Of course, after beer comes the toilet.

Hole In The Train